Homepage
About Us
Guidelines

A History of the Fullers and the Foundation

A Worcester industrialist, George F. Fuller was formerly president and chairman of the board of Wyman-Gordon Company, a leader in the forging industry. The founder was a trustee for many years of Worcester Polytechnic Institute, served as a director of the Mechanics National Bank of Worcester, and was associated with numerous social, educational and philanthropic institutions. After Mr. Fuller's death in 1962 the Foundation received substantial bequests from his estate. 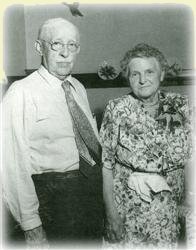 George and Sybil Fuller at their
60th Wedding Anniversary reception in Gloucester, Ma. *